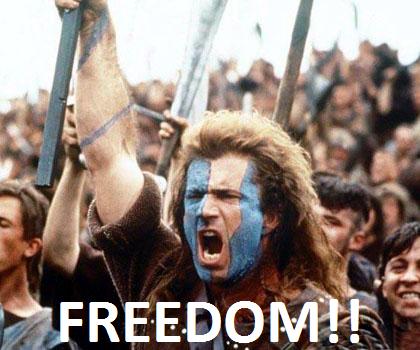 We are born to fly and be free, but the system in which we live wants us to be slaves. I have been in different parts of the world and I can definitely say that every country has its own form of slavery.

I have seen people who are slaves to money, to themselves, to the logic of exploitation. People that are slaves to their appearance, of what others say or think about us, slaves to egotism and consumerism. Slaves to a reality that uses us and when we no longer serve it, throws us away. A society based on God’s money. A society that has lost is bearings and is drifting. A society that is no longer content with what it has. We always want more from this unbridled pursuit of excess, of diversity.

Freedom is not anarchy. It is not doing anything that you want. Freedom is respect for human dignity. It is fighting for life, for the truth, for justice. Freedom is chasing our dreams. Expressing ourselves. But it is also, and above all, respect for rules that were made at the beginning of time. Rules that follow a natural law. Rules independent from any type of religion precisely because they existed before the religions themselves.

Killing a person is wrong, not because the Ten Commandments or Christianity says it, but because even those who are Buddhist or atheist know that it is wrong. Each of us has a soul, a conscience. I am referring to this rule. Let’s try then not to overturn these things, so we don’t find ourselves in the midst of earthquakes.

Let’s try to listen more to the angel beside us rather than the devil.

THE COURAGE OF THE TRUTH
ARE WE REALLY FIGHTING ISIS WHERE IT NEEDS TO BE FOUGHT? ISIS IS READY TO MARCH ON ROME