ARE WE REALLY FIGHTING ISIS WHERE IT NEEDS TO BE FOUGHT? ISIS IS READY TO MARCH ON ROME 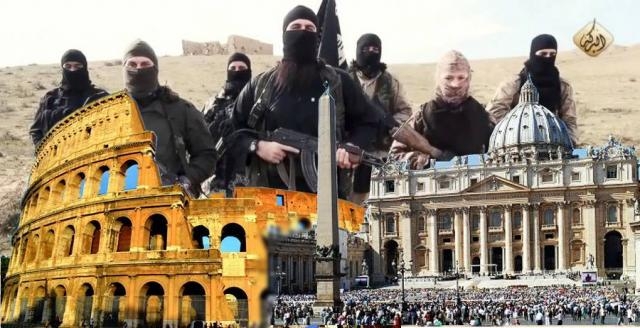 Isis wants to destroy the Church. This is their purpose, their mission. But nobody says anything about it.

In reality nobody is fighting Isis where is should be destroyed, particularly in Italy.

We cannot afford to be so naïve and not consider the fact that, in recent years, we haven’t thought about the terrorist cells placed in other countries, especially in Italy, thanks to the phenomenon of illegal immigration. By saying nothing, we are also enrolling all the ‘foreign fighters’ who are hard to identify, who voluntarily decide to support the cause of Isis. A cause in the name of hatred, violence, destruction.

It is from here therefore, that the signal is given and death is incited, and all hell breaks loose.

The problem is that nobody has tried to recognise and dismantle these terrorist cells where they really need to be dismantled.

They prefer to say that moderate Muslims don’t exist. They prefer to maintain that the Koran says: ‘Kill the infidels’. There is nothing about spreading the wrong idea! This idea provokes a religious war and leaves Isis completely free to act and destroy the Church!

The Muslims recognise God as Allah and Jesus as a prophet. We don’t need unity of religions but respect. The respect that stems from the recognition of the existence of God.

Why would Muslims want to kill the infidels? Because they believe in Jesus? No, the infidels were those that believed in deities and not in one God. The word infidel has been misinterpreted. We come from a historic time where there were deities.

The idea that they circulate is the Isis game, to encourage the division between Christians and Muslims. Why? To arrive at a false religious war. False because it stems from the deceit created on purpose by Isis.