THE STRENGTH WITHIN YOU 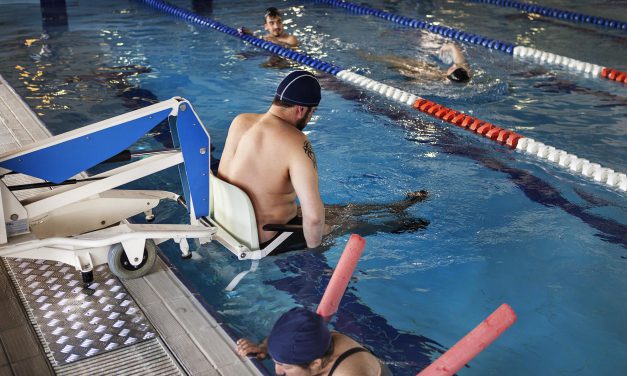 One day I went into a recovery centre for young victims of accidents. Young people that had to regain mobility in their limbs, but, above all, young people who had to overcome the struggles within themselves, the struggle of not being able to walk independently anymore and the struggle of having to depend on others.

I decided to follow one of them and accompany him on his slow recovery.

This young man was called Tommy, he was 19 years old. One Saturday evening, a car ran over his motorbike whilst he was coming home from an evening with his friends. After being in a coma for two months, it was a miracle that he was alive. Fortunately, there was no brain damage, but he had difficulty in speaking, remembering and carrying out the most basic movements.

Every day he did his recovery activities, but unfortunately he wasn’t getting any better or getting his energy back. He was often very introverted, experiencing a pain that no one could heal.

Every time Tommy entered the water, he didn’t want to move his legs, it was as if he felt constantly paralysed. Those damaged legs did not feel part of his body any more. It was as if he had rejected them.

He had sustained a fractured fibula and tibia. He had operations, and the orthopaedic surgeons inserted rods into his legs. Tommy could not accept his body, he could not forgive the driver of the car that had reduced him to this condition, causing him such strong pain that radiated not only through his body, but also his spirit. Tommy had lost confidence in himself, he felt like his young life had come to the end of the line. He who in his youth had already won numerous medals in swimming competitions, he who had fought for every stroke and had used all his energy in every length. He who taught his friends that in life you should never be content, never give up on want you want to achieve, but strive, react and arrive at the finish line. It is not necessary to finish first but you need to get there by respecting your own limits and weaknesses, but without allowing them to hinder your goals.

I had to restore confidence in Tommy. He had to start believing in himself again, believe that it was possible to recover from his condition, if he really wanted to.

One day whilst he was in the swimming pool something happened that changed him, which made him become the young boy that he was before, the Tommy that everyone knew.

A new boy had just arrived at the centre. He had just started swimming lessons. The physiotherapist who had followed his rehabilitation had bent down to pick up his equipment. The boy lost his balance, let go of the wall and ended up in the water. He could not keep afloat. In a split second, Simone started to swim, to move his legs quickly. He saved the boy’s life and the staff decided to give him a gold medal. Tommy had forgotten his problems and his suffering, in order to help a boy that, like him, had to regain his mobility after an accident.

In that split second, Tommy realised that, if he wanted, he could help that boy. On seeing what happened, the staff member had let Tommy swim out to help and let him do what he felt in his heart. The staff member had controlled the situation without intervening because he was convinced that, from this sudden rescue, Tommy would regain confidence in himself, in his own ability. That his limbs, that up until this moment seemed impossible to move, would finally come back to life.

Tommy had won his battle.

SHOCKING NEWS: Donald Trump is the new President of the United States. What now?
CONFIDENCE IN YOURSELF