THE LIFE OF FRANCESCO 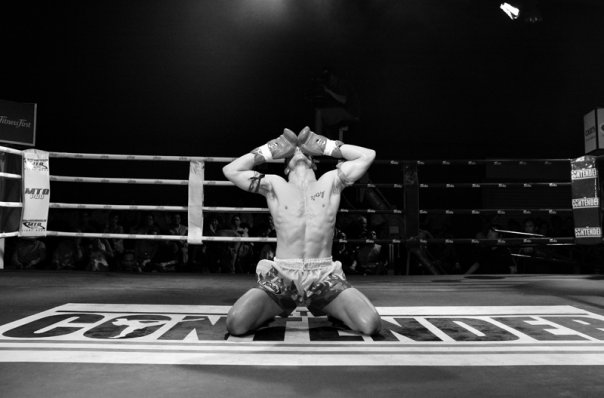 Francesco studied medicine. He was a very capable student whose results might suggest a very respectable career. His family were exceedingly wealthy. He had an older sister who was already a doctor and could be very successful in her career at any moment. He also had a twin brother, a brilliant student like himself, but in the field of industrial engineering, who was on the path towards taking over the thriving family business. Then he also had another sister, much younger, who was a first year student of economics, with her future already mapped out at the company. An equal number of two doctors and two managers, in a family that resembles a nineteenth century painting, in an exquisite frame, carved in gold. However, Francesco’s true passion, his daily obsession, which had now basically become his profession and was his sole reason for living: to fight. What he loved was not the fighting technique, but the actual fight itself. The adrenaline that pumped into him before starting a Thai boxing fight and that would then cascade like a waterfall onto the opponent, the ever increasing satisfaction of the pain that he could inflict, or that could be inflicted on him instead. And everything else. His sharp, blue, penetrating eyes, that were bruised and bleeding, his dark blonde hair soaked in sweat, a beautiful but wretched image of his sparkling invincibility. All of this made him a big hit among women, when he did not consider his own life as anything special, but this was not the problem. He fought and studied with the same amount of drive, the study taking place in his spare time. He had hidden the fighting from his family for a very long time but now he was becoming semi-professional, and he therefore had to travel a lot.

First his mother and then one by one his brothers and sisters tried to talk to him. But there was no going back, there could be no other way. For him, the fight was not just against his opponent but also against the life that his family had chosen for him, which he could no longer tolerate. So any conversations would almost always end in a violent argument with mutual retaliation, hysteria and threats, which wore them out much more than him, apparently. They had begun to ignore each other for pure survival reasons and his fights, his battles, his broken noses, his entourage of girls, no longer interested anyone in his family. Only his mother did not completely give up and kept trying from time to time.

One day he found himself having to choose. He could no longer do both the studying and fighting at that level. Even though he did not care about university any more, it still seemed a waste to throw away years of study. And then there was his mother with her words, but above all with her silence. She spent hours in an empty, half-dark church in solitary prayer. “I hope she is praying for the country”, Francesco said to himself after seeing her leave the church one day, but in his heart he knew that it was not so, or at least, not entirely.

So it was that night, he found himself in front of Joan Stroll. For the first few minutes he thought of the fight as just “one of many”. Stroll was not as big or strong as him and, despite not having fought him before, he was not in the least bit worried. However, the angular Italian was stunned when he was first knocked to the floor by a somewhat predictable kick from Stroll. Francesco was suddenly and unexpectedly defenceless. The rest of the fight was an ever stronger vortex into which he had fallen and was being dragged further into. He did not understand what he was feeling, rage, and a sense of confusion, of fear mixed with uncertainty. Already weakened, his hollow legs gave way. This was a feeling he had never experienced before and that he did not know how to describe. The only thing that was clear was that his opponent was not the man that stood in front of him. So, who had defeated him that night? Who had shattered his invincibility? He searched for an answer, shut away in the changing room, in tears, in the dark, after vomiting several times from the incredible pain in his stomach. He had wanted everyone to leave him alone. The fight, the girls, the fame flashed through his mind. For a few seconds he thought that what happened had just been an accident, that he would quickly get it all back again, but after a moment had passed these thoughts came crashing down around him. For the first time, he saw what his life had become…empty. Completely empty! A sense of emptiness that pervaded from his head to his toes. His tears became sobs, his fists opening and closing constantly. “Is this really the life I want?” he repeated over and over in the mirror. At that moment that his fists opened…definitely.

Many years had passed since that moment and he was now able to openly talk about it. Sometimes he needed some inspiration from his past to be able to give the sermon at Sunday mass, or inspiration from when somebody comes to you for advice. Because Father Francesco’s door was always open. To everyone.

THE BOX OF PAIN (BULLYING)
WELCOME TO MY BEACH…